Where possible, domestic government financing of core activities is preferable to ensure scale and sustainability. Domestic government financing could come in many forms depending on the structure of the government’s health financing system, with common models including the establishing of a domestic budget line for hepatitis funded out of taxation or the inclusion of viral hepatitis into social health insurance systems. Some government budget line is critical to ensure the operation and governance of a viral hepatitis program, whereas health insurance can cover diagnostic and treatment-related costs. For a budget line approach, governments must decide if they can finance this within the existing budgetary envelope through reprogramming or integration of activities, or whether new ways of raising funds need to be considered. For an insurance approach, governments must consider the level of coverage and eligibility requirements that they can afford. In both cases, the decision will require working closely with units outside the Ministry of Health including the treasury, ministry of finance or social security entities in order to make the case for funding. This process can take a significant amount of time and requires high level leadership and advocacy from the Ministry of Health.

Hepatitis can be included in the insurance package. 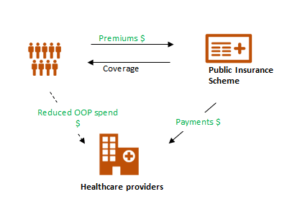 In 2016 Mongolia took the decision to include HBV and HCV medicines in their national health insurance, which covers 98% of the population. Individuals seeking treatment in both the public and private sectors are reimbursed, with about 60% of the cost for HCV treatment and 80% of the cost of HBV treatment reimbursed. For HCV treatment the amount that is currently reimbursed (USD $265) is fixed so the proportion of out-of-pocket expenses to the patient will decrease as prices fall.

An excise tax is an indirect tax charged on the sale of a particular good. An excise tax could be added to the sale of tobacco or alcohol or both which would not only generate revenue but also act as a public health instrument to reduce consumption of goods that have a negative effect on health.

Given the link between alcohol and liver disease a tax on alcohol could prove to be an effective public health tool.

A hypothecated tax on alcohol would address this challenge and help to ensure that all revenue would be spent on the hepatitis programme.

Taxes on alcohol and tobacco

Thailand: the Health Promotion Act of 2001 established a tax on tobacco and alcohol which has resulted in US$120 million being raised annually for health promotion efforts.

Philippines: In 2012 the Philippines raised taxes on tobacco and alcohol and after 3 years $3.9 billion in additional revenue was raised, 80% of which went towards financing the extension of their health insurance to the poorest 40% of Filipinos. In this way they are using the revenues raised from these taxes to assist in their efforts to reach Universal Health Coverage.

This is an innovative financing mechanism which has been used globally by UNITAID but the principles of which could be applicable on a smaller scale. UNITAID uses an airline solidarity levy which is a tax on airline tickets charged to passengers taking off from airports in the countries that implement the scheme. This accounts for a significant proportion of UNITAID funding (64% 2006-2013, amounting to $1.3 billion) and shows that a small levy passed on to consumers has the potential to generate significant income.

Treatments and diagnostics for both HBV and HCV could be purchased in this way.

Countries, including Nigeria and Cameroon, have decided to procure hepatitis drugs and diagnostics directly from generic companies and sell to patients at much lower margins than would be charged in the private sector. Revenues from sales are then channeled into purchasing more supplies. The Ministry of Health in Khartoum State, the Sudan, implemented a Revolving Drug Fund (RDF) in 1989. An evaluation of the RDF showed it fulfilled its purpose and highlights lessons learnt which could be used by countries or states looking to do something similar. The findings of this evaluation can be found here.

Public-private partnerships encourage collaboration across sectors and their objectives can include increasing awareness, contributing to co-payment of treatment through grants or loans and covering diagnostic investigations.

Companies could pay for their employees to be tested for hepatitis B and C. Those that test positive could then be referred for treatment in public health facilities.

Public-private partnerships have been utilised in other health areas and could be successfully applied to hepatitis.  The mining company Rio Tinto operates voluntary HIV testing in areas with a generalised epidemic which allows employees to either take steps to remain infection free or avoid spreading the infection and gain access to support and treatment. Through implementation of this they have achieved prevalence rates significantly lower than the wider community.

Shell has also used public-private partnerships in the markets in which they operate. In the Philippines, Shell has engaged in an ongoing public-private partnership in malaria control which is called Movement Against Malaria (MAM). In partnership with the Department of Health, local governments and international bodies such as WHO, Shell’s organisation in the Philippines set up this movement with the aim to eradicate Malaria in the Philippines by 2020. Through their work with MAM they have been involved in prevention and awareness activities and have built the capacity of health care workers.

Risk-sharing agreements are very applicable to viral hepatitis. Any of the different types of arrangements could be considered by countries. Specifically a pay per cure could be agreed for hepatitis C treatment so that the government is only paying for treatment for those that reach SVR with the pharmaceutical company covering the rest.

In 2014 France not only negotiated a low price with Gilead Sciences for their hepatitis C drug Sovaldi, they also entered into a risk-sharing agreement. The terms of the agreement are that the price of the Sovaldi will go down if volume hits certain targets and pay for performance clause states that if treatment doesn’t work, France will get money back from Gilead. In return, France agreed to fully fund hepatitis C treatment for patients meaning no co-payments from patients are required.