Prior to any costing taking place it is important to establish the current epidemiological baseline and determine future projections. This will help you to understand the overall disease burden and will set measures for both the disease progression and transmission models for HBV and HCV. Both the prevalence, which is the amount of disease in a population at a given time, and incidence, which is the number of new cases of a disease in a population over a given period of time, will need to be measured and understood. To determine the prevalence and incidence the following will be needed and used as a basis for modelling future estimates:

In the absence of good data sources, a reasonable approximation may be possible by extrapolating from neighbouring or similar countries. Lack of data should not be a barrier to costing a viral hepatitis programme. Sub populations, especially those at high risk, will also need to be differentiated as there may be different costs to reaching them for diagnosis, treatment and prevention activities. For each of the sub populations you will need to determine population size, disease prevalence and incidence. Sub populations include:

The national hepatitis programme should be fully costed with the objective to reach the 2020 and 2030 WHO targets. The outcome of this will give countries an overall cost for elimination.

Ideally each country will have a national hepatitis action plan. This should clearly set out the interventions that will be needed to eliminate viral hepatitis by 2030. To ensure a fully costed programme both commodity and infrastructure costs must be accounted for. A “bottom up” approach to costing (figure 1) is recommended to ensure the programme is comprehensively costed. This is where the total cost per activity is calculated by breaking down and estimating the specific cost drivers for each activity. The realistic country budget will be completed at a later stage but using this approach will aid with strategic decision making at the financing stage as it is likely that different areas of the hepatitis programme will require different sources of financing and a good understanding of costs will be required to drive these decisions. The inputs to be considered when costing the programme will include:

The unit costs are multiplied by the frequency/quantity of an activity to arrive at the total annual cost of the activity. The assumptions for each activity will vary in complexity. 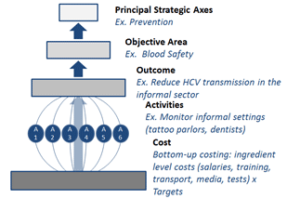 Areas that you may wish to include as part of this costing exercise are below.

Costs relating to the training of existing healthcare workers around the prevention, treatment and care of viral hepatitis or the recruitment of additional staff have not been included in the above table but it may be useful to undertake a separate costing exercise for this.

The World Health Organization (WHO) has set the below elimination targets and countries may want to do the costing with the objective of reaching these targets. WHO has set out targets for 2020 and 2030 but intermediate targets can be set for each of the hepatitis programme areas to increase the accuracy of annual costing.

Each WHO region also has an action plan or framework, agreed by all countries in that region. Some of these contain more ambitious targets than set out in the GHSS and links to these can be found below.

A costing tool has been developed to help countries with this process. It follows the “bottom up” approach to costing by breaking down what needs to be costed under each of the cost categories detailed in Table 1. It also breaks down the cost by year to enable you to set annual targets to help reach the overall elimination targets.

Areas where costs can be minimised will need to be determined as this will ensure the true cost to the health system is measured.  Different ways of minimising costs are noted below.

In an environment where, for example, the prices of commodities such as drugs and tests are expected to fall this could be captured by entering different prices to produce a range of overall costs. Conversely, other prices may be expected to increase over time due to inflation.

Integration explores how to use and link current systems, including infrastructure, and existing programmes to increase efficiency. This is underpinned by the concept that it is more efficient to share resources rather than devote them to one disease and it is more effective to deal with a person as a whole rather than each of their health issues separately. When considering integration you may want to involve people from other departments or organisations, such as:

Pooled procurement is the process of a group of countries, or organisations within a country, coming together to improve the outcome of procurement for each of the individual members. It works by increasing the purchasing power of the individual countries by pooling demand. It can be used for vaccines, diagnostics or medicines and, when successfully implemented, can ensure that countries have access to a sustainable and affordable supply of commodities.  WHO has identified that countries that are likely to benefit from pooled procurement usually have at least one of the following characteristics:

This strategy can also work within a single country if the procurement is currently fragmented or facility driven. Current mechanisms within hepatitis which utilise the concept of pooled procurement at the country level are detailed below.

Direct negotiations with suppliers of diagnostics and medicines is a useful tool in securing better prices and so reducing costs. This can be greatly aided by knowing what other countries are paying. Close links between hepatitis programme managers in different countries that facilitate information sharing can be developed during meetings like the World Hepatitis Summit.

Australia has been able to achieve universal access to hepatitis C treatment by driving down drug prices through direct negotiation with pharmaceutical companies. The government agreed to commit AUD $1 billion over 5 years in a risk-sharing arrangement with the pharmaceutical companies which gave them a major discount on drug prices, a maximum expenditure per year but with no cap on treatment numbers. This has resulted in Australia starting almost 40,000 people on treatment since March 2016 and placing it on track to eliminate hepatitis C by 2026. Source: Negotiating better discounts for DAA therapy is critical to achieve HCV elimination by 2030, Gregory J Dore, Jason Grebely, Journal of Hepatology, Volume 67, Issue 2, August 2017 Monitoring hepatitis C treatment uptake in Australia, Issue 7, July 2017, Kirby Institute