India’s Punjab State is a global leader in the hepatitis response. Since 2016, Punjab State has provided free hepatitis C treatment to all residents, treating 69,684 people between 2016 and August 2019. It is the first state in India to launch such a programme.

Despite the progress made in Punjab State to date, the State Viral Hepatitis Management Unit (SVHMU) within the Punjab State government identified that, without a scale-up of their current interventions and roll out of new interventions — including increased awareness-raising, workforce training, and decentralisation of the response to primary and community health care centres—, they would fail to reach elimination.

In order to achieve hepatitis elimination, further funding and a viable financing plan would be required.

To develop the investment case for hepatitis C elimination in Punjab state, WHA partnered with the SVHMU, WHA members, CHAI and other stakeholders. The aim of this work was to give the SVHMU a robust tool to help in their efforts to obtain increased investment in hepatitis elimination services. Launched on World Hepatitis Day (28 July) 2020, you can read the full report here.

During the development of the investment case, two scenarios were costed using a bottom-up approach: status quo and elimination. While the status quo scenario does not reach elimination, the elimination scenario achieves elimination by 2030 and was found to be not only cost-effective but cost-saving. In fact, if an additional INR 267 crores (INR 27 crores or USD $3.5 million per year) is invested in Punjab for hepatitis C in the next 10 years, Punjab will not only reach elimination, but will save a staggering 550,000 lives and 1400 Crores (USD $188 million).

This creates a strong argument for investing in hepatitis C elimination which is particularly important as Punjab’s priority health interventions face strong competition for a limited pool of resources. Unlike HIV, TB and malaria, there is no large-scale donor funding for hepatitis. Consensus from stakeholders within Punjab State was that the primary source of funding for scale-up must come from the government. The report therefore gives the SVHMU the information they need to more effectively advocate to the Ministry of Finance for resources and so continue to ensure that Punjab State is a leader in eliminating hepatitis C.

Since completing the work in India Punjab State, the world has been changed by the COVID-19 pandemic, placing unprecedented pressure on health systems and economies. As we look towards a more uncertain financial future it has never been more important to have the tools to advocate for hepatitis financing which is why national and state investment cases such as these are so critical. 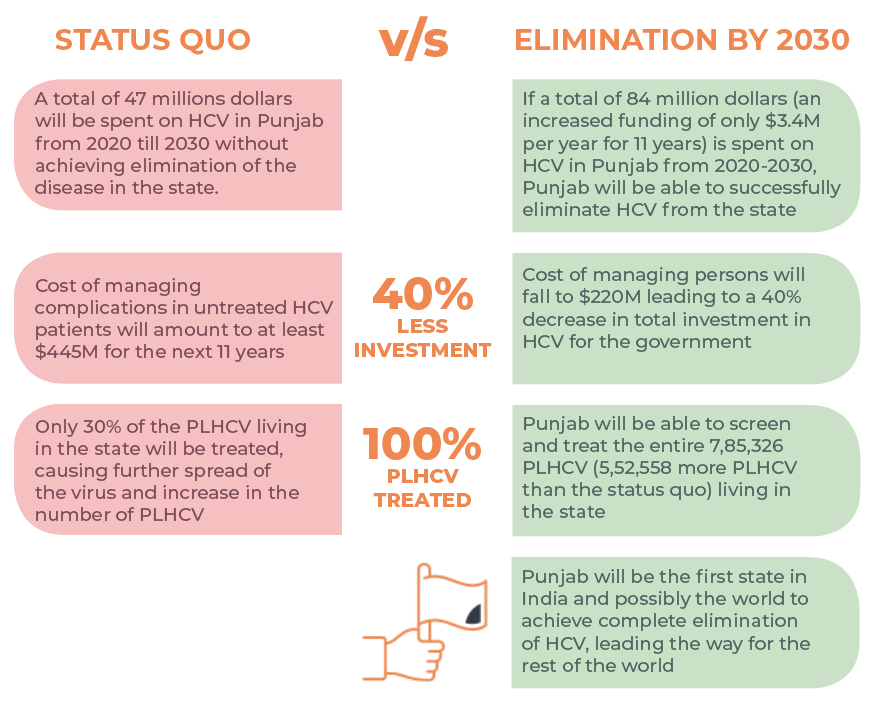